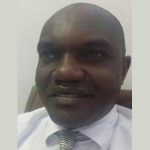 Jean Jacques Bambuta Boole has been the peatland management unit coordinator for the Ministry of Environment and Sustainable Development in the Democratic Republic of Congo (DRC) since 2018. Trained as an anthropologist, he previously spent three years as the ministry’s decentralization coordinator within the framework of the United Nations’ REDD+ (Reducing emissions from deforestation and forest degradation) program. During this period, he also served as an advisor on REDD+ and renewable energy for the Netherlands Development Organisation (SNV) in the Democratic Republic of Congo. From 2011 to 2015, Jean Jacques was a REDD+ coordinator in the former province of Bandundu. A DRC national, he completed a master’s degree in social anthropology at the Catholic University of Central Africa in Yaoundé (Cameroon) in 2004 and earned a doctorate in anthropology at the Université Libre de Kinshasa in 2015. He is based in Kinshasa, the capital of the DRC.