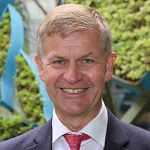 Following an extensive career in government and international development, Erik Solheim was elected Executive Director of the UN Environment Programme (UNEP) on May 13, 2016.

Prior to joining UNEP, Solheim was the chair of the Development Assistance Committee (DAC) of the Organization for Economic Co-operation and Development (OECD). As the head of the DAC, which is the main body of the world’s development donors, Solheim promoted the role of private sector in development finance, spearheading the Sustainable Development Investment Partnership and the Addis Tax Initiative. Solheim also focused on channelling more aid to less-developed countries, and bringing new members and partners to the DAC.

In 2005, Solheim was appointed as Minister of International Development. During this time, Norwegian aid reached a record 1%, the highest global percentage. Solheim also introduced the Nature Diversity Act, which is considered to be Norway’s most important piece of environmental legislation to date. From 2007 to 2012, Solheim held the combined portfolio of Norway’s Minister of Environment and International Development. He successfully established the Norwegian Climate and Forest Initiative, in which Norway cooperates closely with Brazil, Indonesia, Guyana and other countries to conserve rainforests. The initiative provided critical input to the establishment of UN REDD, the global coalition to reduce emissions from deforestation and forest degradation in developing countries.

Erik Solheim holds a degree in history and social studies from the University of Oslo. He is married with four children.