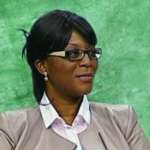 A journalist by training, Arlette Soudan-Nonault grew up and studied in Moscow and Paris, and has worked as an anchor, producer and columnist, before joining the Republic of Congo’s Presidency as a press attaché. After working as a consultant in private communication, in 2005 she founded the Saint Francis of Assisi Institute (IFSA), a boarding school on the outskirts of Brazzaville.

A member of the Political Bureau of the Congolese Labor Party, her Excellency was made Knight of the Order of Congolese Merit in 2010 and was appointed to lead the Ministry of Tourism and Environment in 2016.