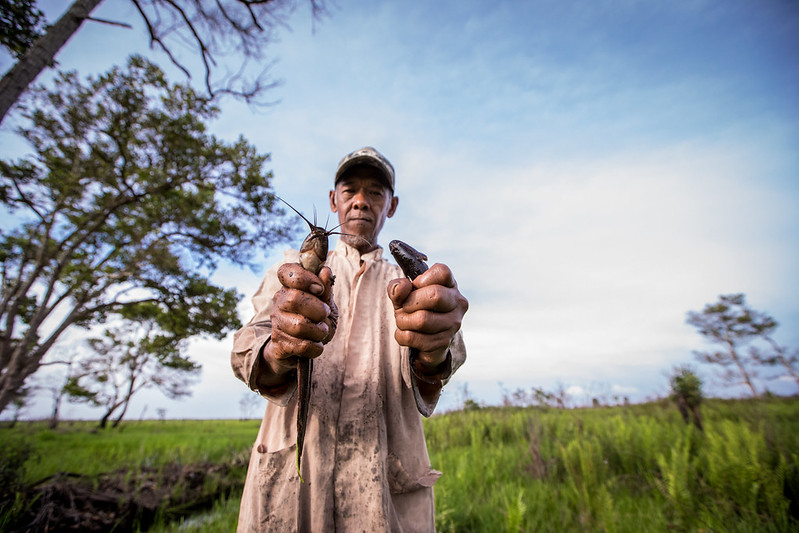 Throughout the Indonesian archipelago fragile peatland ecosystems are subject to the vagaries of weather patterns hard hit by climate change, exacerbated by deforestation and repeated burning.

These swampy areas are often drained for agricultural use, leaving them parched and subject to frequent fires, at times ignited intentionally as part of traditional preparations to clear and prepare land for planting crops, another factor increasing their vulnerability.

At the all-digital Global Landscapes Forum (GLF), which was broadcast from Bonn, Germany, the key role of peatlands was discussed. Not only are they significant carbon sinks, which when disturbed can contribute substantially to global warming, but they form the basis of domestic and international food security initiatives.

Through discussions that reflected on the history of peatlands, delegates were reminded that in 2015, devastating fires blazed across swaths of Indonesia with massive consequences, jeopardizing food systems, livelihoods and habitats.

The environment suffered, both at the local level through damaged peatland ecosystems, and globally from the tons of carbon dioxide emitted into the atmosphere – on some days more than the average daily emissions for the United States.

Through those record-breaking 2015-2016 fires, the interrelationship between the environment and human health was made crystal clear as drifting smoke and haze spread pollution throughout Southeast Asia, causing more than $16 billion in overall economic damage, affecting 43 million people, hospitalizing 550,000 and killing 24 people, according to reports.

From these ashes, local communities, government officials, scientists, and conservationists in Indonesia worked together to develop a more sustainable plan for peatlands.

At the same time, global partners from Central Africa to Peru rallied around Indonesia to form the Global Peatlands Initiative (GPI) and also resolved to better manage peatlands. Peatlands are the most carbon-dense ecosystems on the planet.

When wet and healthy, peatlands are vital carbon sinks made up of layers of decayed vegetation compressed into wet soil over many centuries.

The GPI has been increasing awareness of the environmental and socioeconomic importance of these unique landscapes.

Yet, communities living in and around peatlands have always known how special they are.

“Through peatlands, we hope to improve the economy and welfare of the people,” said Gerard Bondeko, communities coordinator for the Wildlife Conservation Society in the Republic of the Congo, speaking on the topic as a GLF panelist.

In particular, he pointed to the role of small-scale wet subsistence agriculture in the Cuvette Centrale — more than 145,000 square-kilometers of peatlands in the Congo Basin. There, smallholders hunt, fish, and plant manioc and bananas on the waterlogged peatland ground rather than clearing or draining it. Bondeko said that such land use models empower locals to conserve the peatlands.

Roch Germain Mpassi-Moumpassi, director general of sustainable development in the Ministry of Tourism and the Environment in the Republic of Congo, added that regulatory provisions for environmental protection and sustainable natural resources are important to supporting peatland communities.

In recognition, Mpassi-Moumpassi helped to draft the Brazzaville Declaration on Peatlands, signed alongside the third meeting of the GPI partners in 2018 by the Democratic Republic of Congo (DRC), the Republic of Congo and Indonesia. The declaration commits these countries to work together to protect and better conserve the transboundary Cuvette Central Peatlands —where the equivalent of three years of global greenhouse gas emissions is stored in the wet soil.

The DRC Peatlands Unit is the first of its kind globally. Bambuta concluded that in the DRC policymakers are aware that a peatland policy must link the protection of peatlands to the enhancement of this ecosystem. “The most important question for us is what opportunities can conservation of (these) peatlands bring for nature and (our) peoples,” he said.

Since the 2015 fires, recovering communities in the Indonesian province of Riau on the island of Sumatra now deploy shifting cultivation techniques to implementing their own sustainable practices.

Village representatives at GLF near Dompas shared experiences of their involvement in the Community-based Fire Prevention and Peatland Restoration initiative, which is supported by the Center for International Forestry Research (CIFOR). The villagers have implemented the 3-R approach: rewetting, revegetation, and community revitalization.

“We hope to develop our village and become an example for other people and the welfare of our people,” said one villager.

Small-scale farmers have also received training in paludiculture (wet agriculture) and environmental management. Sustainable fish production —a key source of protein — has also been important both for food security and a source of income for peatland communities.

“Fish resources are important for food security so peatlands must be kept as wetlands,” said Zulaili Isnaini Habib, a lecturer of Anthropology with the University of Riau, explaining that traditional, environmentally sound methods of catching fish are used.

Alue Duhong, vice minister of Indonesia’s Ministry of Environment and Forestry, pointed out that the benefits of the restored peatlands go well beyond agriculture.

“Indonesia is very rich in nature and biodiversity and peatland habitats are very important to sustaining rare wildlife found here such as sunbears, orangutans, elephants, rhinos,” he said.

The session highlighted that people locally and globally depend on peatlands for their survival since the ecosystem services they provide are critical not only for the global climate system, but also for water quality and quantity.

“We need to keep the water table high to grow a range of wetland crops to improve carbon storage, combined with agroforestry and forest restoration,” Duhong said. “The next big challenge is scaling-up. But if we do that it is a win-win for development and for the environment.”

The wide-ranging benefits of healthy peatland ecosystems are now at the core of projects that incentivize people to protect them during a time of great food insecurity and other economic challenges.

Healthy, wet peatlands sustain rare and threatened biodiversity, help filter pollutants, regulate water flows, curb wildfires, and store 30 to 40 percent of the world’s carbon. Keeping them functioning and healthy will be key for a healthy climate future and limit further greenhouse gas emissions that occur when they are drained or degraded.

Peruvian peatlands were also discussed during the GLF event. Through their diversity they provide important ecosystem services from the Amazon to the Andes.

“Peatlands support Indigenous communities in the lower Amazon, and in the Andes they are important to the water cycle and as a resource for local communities,” said Gabriel Acosta, deputy minister for Strategic Development of Natural Resources in Peru’s Ministry of Environment. “They even provide water for big cities such as Lima.”

Peru is working towards a new paradigm for conservation and sustainable management of peatlands, Acosta said.

Communities in Peru are moving beyond traditional approaches centered around unsustainable commodity production, and pursuing the sustainable management of aguaje in the Pacaya Samiria National Reserve with private sector partners.

Despite these positives, many challenges remain to ensure peatlands are not further degraded or destroyed, delegates said.

Sustainable agriculture on peatlands is limited and at the ground level, the highly acidic, low-nutrient peatland soil makes it entirely unsuitable for most types of agriculture. Also problematic is land subsidence and land loss which occurs when peatlands are drained, often resulting in coastal inundation and salinization, rendering these areas irreparable, unproductive and abandoned.

Meanwhile,intensifying climate change contributes to extended droughts and drier weatherin some regions, and flooded conditions in others.

The conservationand sustainable management of peatlands must be made a priority for thelong-term health and well-being of communities they directly support, and forthe global community who rely on them for the vital services they provide.

New models fordevelopment are needed for peatlands sustainable management and conservationand must be context specific and linked to efforts to include green jobs as wework hard to build back better after COVID-19.

The coronaviruswas also discussed by delegates, and Duhong also noted new pressures on peopleand the environment.

“With thepandemic, the government of Indonesia recognizes it has to be very carefulabout food needed for communities while maximizing ecosystem restoration,” hesaid. “Indonesia is trying to balance development and environmental protectionand putting in place sustainable practices that encourage alternativelivelihoods.”

These are vitalsteps that will help Indonesia and its people “build back better” in the wakeof COVID-19 closures.

“We are still theearly stages of understanding how successful we can be in restoring peatlandecosystems of the tropics,” said Susan Page, professor of physical geography atthe University of Leicester.

“We have torestore hydrology, fire control (particularly in southeast Asia), and have totake into the account the many communities living in or around peatlands. Thoseprojects focusing on the holistic approach to protecting peatlands and offeringalternative livelihoods are a way forward.”