Peatlands play a significant role in the migratory patterns of birds. The aquatic warbler (Acrocephalus paludicola), for example, breeds in Europe and West Asia, flying to West Africa for respite from cold winter temperatures. The tiny bird, the rarest passerine bird, or songbird, in mainland Europe, is at risk due to threats to its preferred […] 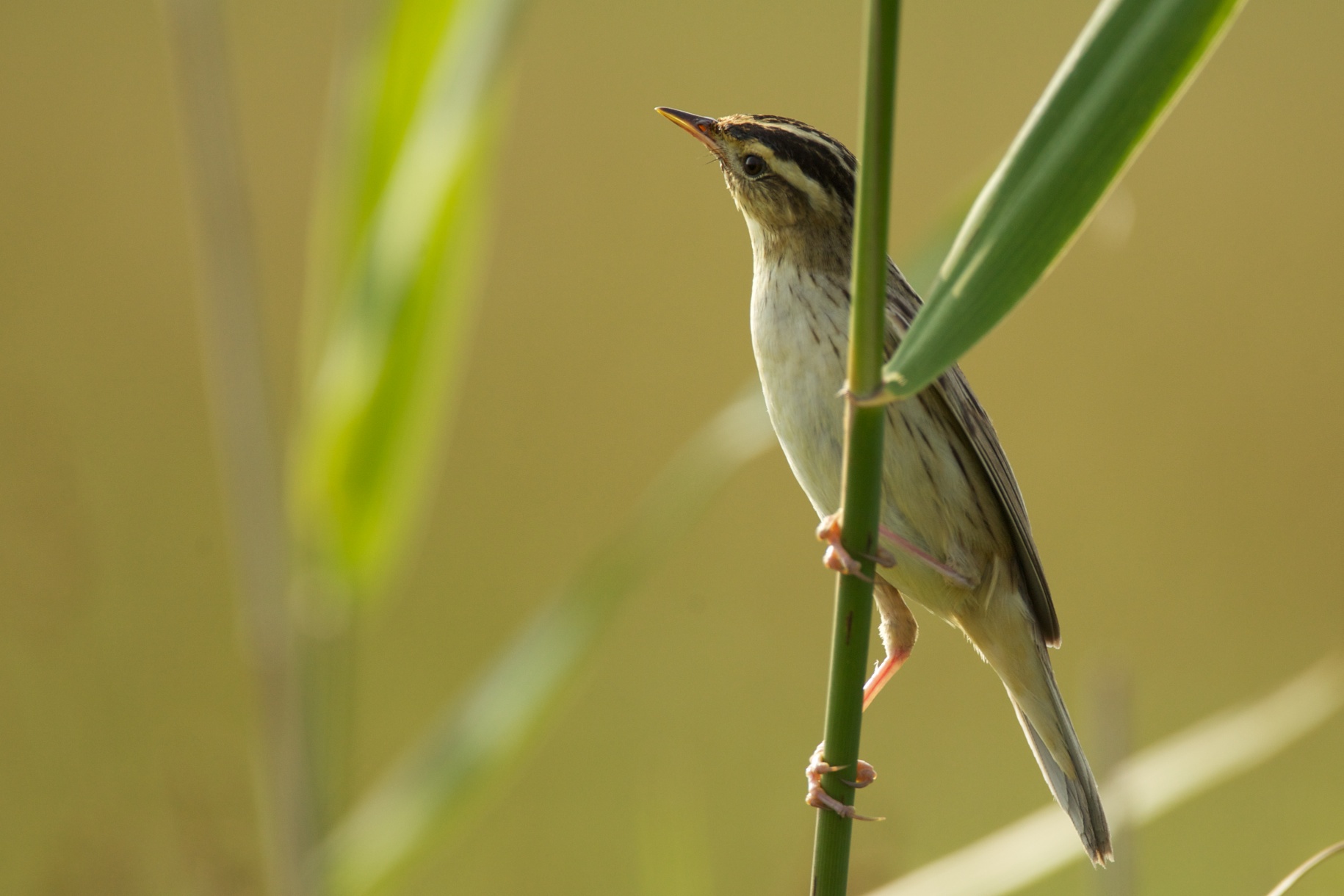 Peatlands play a significant role in the migratory patterns of birds. The aquatic warbler (Acrocephalus paludicola), for example, breeds in Europe and West Asia, flying to West Africa for respite from cold winter temperatures.

The tiny bird, the rarest passerine bird, or songbird, in mainland Europe, is at risk due to threats to its preferred wetland habitats.

“Species do not go extinct alone – they represent an ecosystem,” said Franziska Tanneberger, director of the Greifswald Mire Centre who spoke during a Global Peatlands Initiative-hosted session titled “Peatlands as a super nature-based solution to climate change, and a refuge for unique and threatened biodiversity,” at the recent Global Landscapes Forum Biodiversity Digital Conference.

Supporting aquatic warbler populations means effectively restoring European peatlands, many of which have been drained for agriculture, forestry or peat extraction.

“Another key is networking, knowledge-sharing and exchange between all countries where the bird is flying along, breeding and wintering,” Tanneberger said.

The flight path of one small brown bird might seem a strange entry point into the global conversation on peatland conservation, but species like these can be important “ways in” to understanding how the world’s peatlands connect to each other – and to wider ecosystems and communities.

“The role of peatlands is not only in one place, but also in locations thousands of miles away, in terms of the survival of migratory species and the habitats and people around them,” said Amy Fraenkel, executive secretary of the Convention on the Conservation of Migratory Species of Wild Animals.

Delegates were introduced to the fragility of peatland ecosystems and the biodiversity they support by Susan Gardner, ecosystems director at the U.N. Environment Programme (UNEP), who gently guided them on a journey into some of the most rare, remote and unique places in the world.

“People often just think of peatlands as carbon reservoirs, but they are so much more than that! They are important for our climate, but also for the biodiversity they house, they are vestiges of our history and decisive for our future health and well-being,” said Dianna Kopansky, UNEP’s Global Peatlands coordinator. “Will peatlands be our solution, or our problem? In this event, I wanted people to be inspired and show that everyone is part of the solution, because peatlands here, matter there.”

From government representatives to local researchers, panelists, with their own varied expertise and passions, shared inspiring talks highlighting the need for action to save peatlands for their precious biodiversity, climate resilience and human health at the event.

Protecting peatlands and their populations

Peatlands are a type of wetland characterized by year-round waterlogged conditions, causing dead plants to accumulate and form a substance called peat. They provide critical ecosystem services and are estimated to store around 30 percent of the world’s carbon, despite taking up only 3 percent of the world’s land area. They’re also important habitats for threatened species, from the orangutan (Pongo spp.) of Indonesia to the jaguar (Panthera onca) of the Americas.

Despite their importance, peatlands remain one of the least understood ecosystems and their potential contribution to climate action and biodiversity conservation so far unrealized. Peatlands continue to be damaged and exploited, including through burning, draining, mining for fuel, forestry and agricultural conversion. Around 15 percent of the planet’s peatlands have already been drained, resulting in vast greenhouse gas emissions: each year, degraded peatlands produce close to 6 percent of global anthropogenic carbon dioxide emissions.

The first stop during the GLF event transported participants to Central Africa’s near-pristine Cuvette Centrale peatlands — the world’s largest tropical peatland containing more than 30 gigatons of carbon and home to rare species like forest elephants and gorillas. Arlette Soudan-Nonault, minister of tourism and environment of the Republic of Congo urged that “the fight against climate change is a global fight that will not be won without sustainably managing the world’s peatlands. Their preservation is an integral part of nature-based solutions.”

Zooming over to Russia, Hans Schutten, peatland lead at Wetlands International, shared their experience working on peatlands restoration and fire risk reduction in in the country. Millions of hectares of Russia’s peatlands have been drained and abandoned, making them extremely vulnerable to wildfire. In 2010, Moscow was shrouded in toxic smoke from burning degraded peatlands, resulting in 50,000 additional deaths in the city.

“Science is important and understanding how peatlands work is important,” Schutten said, adding that “as a recipe for lasting success, it’s important that we get local buy-in and build capacity on the ground” highlighting the importance of the social side of the equation.

Travelling south, Alue Duhong, Indonesia’s vice minister for environment and forestry, shared the efforts to protect and maintain the country’s peatlands such as regulations mandating the protection of peatlands deeper than 3 meters, ensuring minimum water levels of 40 centimeters, and suspending new permits on peatlands.

Cognizant of the link between environmental degradation and zoonotic disease outbreaks, Indonesia has channeled considerable resources into backing sustainable, regenerative livelihood projects in and around peatland areas such as non-timber forest product industries and agroforestry.

“We have very special biodiversity in our peatlands, and they’re also an important space for livelihoods, disaster control and culture,” said Duhong. “We need to make sure these vulnerable ecosystems are not further threatened by human activities.”

Nature photographer Tina Claffey offered a glimpse of biodiversity through her macro-lens. Easily-missed micro-marvels and carbon sinking super-stars of peatlands in Ireland such as golden sphagnum moss and delicate details of bright-red “pixie cup” (Cladonia spp.) lichen flowers transported people to another world.

Ifo Suspense, professor of Marien Ngouabi University shared that “tropical peatlands are a mysterious, authentic world and a treasure of exceptional biodiversity” adding that more research to “study the role that animals and plants play in the life cycle in the peatlands of the Republic of Congo is critically needed.”

Participants crossed the Pacific Ocean, arriving in Peru, where Gabriel Quijandría Acosta, vice minister for strategic development of natural resources, shared ways that his country’s peatlands represent cultural and economic cornerstones. “In all three geographic zones – Amazonian, Andean and coastal– peatlands are a fundamental part of the identity and culture of the people who live there,” he said. “So, how do we promote the conservation of the peatlands just as they are, and make the most of the resources that the peatlands themselves generate?” He cited several examples, such as an initiative whereby local communities are partnering with a juice company to sell aguaje fruit from palms (Mauritia flexuosa) that grow abundantly in peatlands here.

Moving south to Patagonia, Kristine Tompkins, president of Tompkins Conservation and U.N. Patron of Protected Areas, shared her experiences creating protected areas and advocating for peatland protection in Argentina’s Peninsula Mitre. The peninsula houses vast expanses of intact “cushion peat bog” characterized by soft carpets of the Astelia pumila, a vascular plant that absorbs over four times the amount of carbon than other types. “When you think about it, their contribution is so massive that peatlands merit immediate and permanent protection,” she said.

Tompkins made an impassioned call to ramp up global peatland protection. “It’s time for natural climate solutions to join mainstream policy,” she said. “We may start by protecting the places we know and love. But it’s time that we defend the wild places and become vocal advocates for peatlands. The future of all life depends on it.”