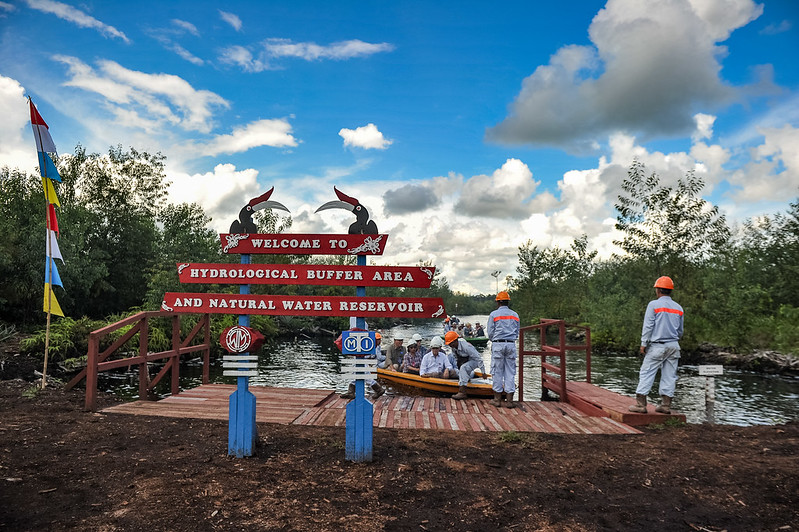 Updated data from Indonesia’s vast peatlands and mangrove forests are being included in an improved Forest Reference Emission Levels (FREL) submission from the national government to the secretariat of the U.N. Convention on Climate Change (UNFCCC) later this year.

The improved FREL, which is a significant tool in climate change mitigation work, represents a major improvement over the previous, 2016 submission because it will include expanded data and information on the country’s wetlands biomass, Belinda Margono, director of Forest Resources Inventory and Monitoring, Indonesian Ministry of Environment and Forestry, told the Global Landscapes Forum (GLF) Bonn Digital Conference.

The 2016 version of the FREL lacked sufficient mangrove forests data “and a lot of information needs to be added on the peatlands itself,” Margono told the online GLF conference which drew some 5,000 people from 185 countries to the virtual event 3-5 June 2020.

Peatlands are extremely significant to the national government she told the session Leveraging data for transformational change towards climate- and forest-friendly food systems. “So we really want to pay a lot of attention,” to peatlands. Indonesia is home to about 36 percent of the world’s tropical peatlands, which are a globally significant store of carbon stocks. About 11 percent of Indonesia’s landmass is covered by peatlands.

It’s important to remember, she added, that “the process for establishing the FREL data requires a stepwise approach (where) we can learn and improve each time.” Indonesia’s government has called for five-year updates of its FREL.

New peatland and mangrove data are “central in the improvement” of the next FREL, which will likely be submitted in November 2020, added CIFOR’s Daniel Murdiyarso, principal scientist with the Center for International Forestry Research (CIFOR), who is involved with the project “Improving Indonesia’s Forest Reference Emission Level.”

Participants in the session also heard about new technology for monitoring and measuring land use and associated greenhouse gas sources and sinks. As well, they looked at innovations and challenges in gathering data for decision-making, analysis and verification of outcomes measured against commitments.

But discussions returned frequently to data and numbers. Numbers are not neutral and data, even when collected and analysed by scientists, reflect power and politics, a climate change scientist told the event.

“If we talk about numbers, then we also have to talk about politics and the power of making choices,” said Maria Brockhaus, a professor in the Department of Forest Sciences at the University of Helsinki.

“Numbers are nothing neutral…facts don’t always speak for themselves – they are interpreted, selected, put into a context,” Brockhaus said.

Political choices based on data are made by decision-makers and not the scientists who collect the information, Murdiyarso said in response to Brockhaus. “Let the numbers tell what the story is,” he said.

Yet numbers don’t tell the entire story, said Christine Lamanna, a climate change adaptation scientist with World Agroforestry (ICRAF). “Data are only one piece of evidence, and there are so many other types of evidence that are really important for decision-making and policy-making,” said Lamanna during the session, hosted by CIFOR.

“How do you combine this ‘hard’ evidence … with other ways of knowing and other sources of information, including farmers’ experiences?” she said.

Mikaela Weisse, manager of the Global Forest Watch project at the World Resources Institute, described how new Radar Alerts for Detecting Deforestation (RADD) technology is being used in Indonesia to monitor deforestation. Palm oil companies can use the RADD data to ensure products in their supply chains do not come from deforested areas, she said.

Similar technology that provides a type of publicly available deforestation alert is being used by Indigenous communities in Peru to buttress legal complaints about deforestation there, said Weisse. “They’ve actually been so successful … that they now have almost zero deforestation alerts in their territory,” she said.

Deforestation alerts can also indicate possible illegal road construction, which can be a sign of illegal logging activities; or illicit crops, said Marco Arenas of Peru’s National Service of Natural Areas Protected by the State (SERNANP). Information from these alerts is used in tandem with remote and direct forest surveillance by local communities and forest rangers, he added, in a Spanish-language presentation with his colleague Raul Martin Reategui Suncion.

These observations are used with the Spatial Monitoring and Reporting Tool (SMART), which then shares its outputs with Peruvian officials, including the Ministry of the Economy, said Arenas. “So with this tool, we are more timely, in our interventions.”

But greater financial support is needed from partners to strengthen remote surveillance, Arenas added. “In the current context, we have to be more efficient in our interventions and the use of technologies will be the way,” he said. “Especially now, in context of COVID-19, to avoid human contact.”

Data alone is only the first step and such early-warning information must lead to real action and results on the ground, added Weisse. A major challenge still exists in getting data results and information back to people working on the ground in areas without Internet access.

Underlying all steps towards transformational change and action are politics and power structures; therefore, acknowledging the political dimensions of numbers should be the starting point for all change, Brockhaus said.