SWAMP works alongside Ministry of Environment 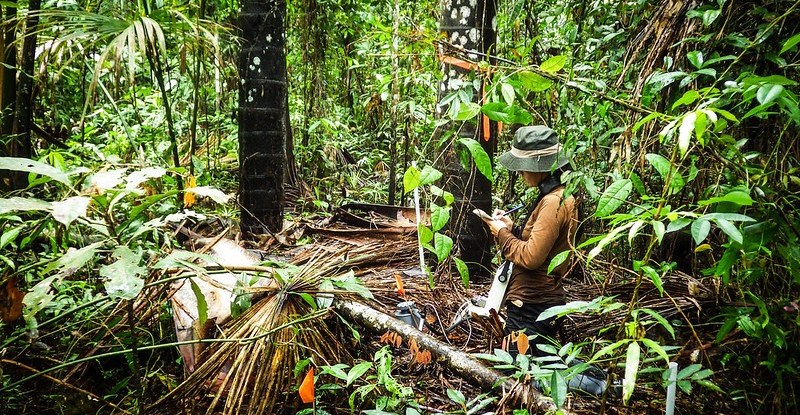 This article is republished from Climatelinks.org under a Creative Commons license. Read the original article here https://www.climatelinks.org/blog/translating-evidence-action-conserve-peatlands.

Peru ranks as the country with the fourth-highest volume of tropical peat, most of which is less degraded than in other regions of the world in relative terms. However, this is a situation that could change due to increasing development pressures and lack of peatland-specific protection policies, which put Peru’s peatlands — and its carbon reserves — at risk.

For the scientists and members of Peru’s Ministry of Environment working on this challenge through the Sustainable Wetlands Adaptation and Mitigation Program (SWAMP) collaboration and effective communication of the benefits of peatlands has been critical to the refinement of national policy in Peru.

The SWAMP initiative, which is a collaborative effort by the Center for International Forestry Research (CIFOR), the U.S. Forest Service and Oregon State University, supported by the U.S. Agency for International Development (USAID), conducts robust scientific research to generate knowledge on sustainable wetland management to inform policymakers and practitioners.

Peatlands support climate change mitigation and adaptation worldwide by storing large amounts of carbon and regulating water cycles. However, despite their vital contribution, they are not always included in national climate change strategies.

Several factors contribute to this omission, including a lack of national peatland data including maps and greenhouse gas (GHG) emission factors, lack of political coordination among sectors for defining and enforcing regulations, and inadequate financing for their preservation, sustainable management and restoration.

In Peru specifically, the unique carbon sequestration potential and vulnerabilities of peatlands were previously overlooked in national policies, including in the national wetlands strategy.

Peatlands in Peru are under pressure from large-scale infrastructure development and urbanization, as well as illegal mining and agribusiness. Preventing the loss of peatlands involves working with governments and getting conservation incentives right.

“To maintain the integrity of Peruvian peatlands, it will be necessary for government policies to recognize their unique roles in tackling today’s global climate emergency,” said Kristell Hergoualc’h, a senior scientist at CIFOR.

National research centers are playing an important role in furthering the understanding of peatlands, raising awareness of their importance among policymakers, and fostering community engagement. Building on SWAMP’s work in lowland and mountain peatlands, she led an effort to raise the profile of peatlands in the national policy dialogue by organizing a major national event last spring in Lima.

The National Symposium on Sustainable Management of Peruvian Peatlands: Scientific Context and Institutional Framework was attended by scientists, managers and policymakers. This event demonstrated the need for a common frame of reference around Peruvian peatlands and dialogue between different actors.

The project also advised the National Forest Inventory and the Wetlands Inventory on protocols for mapping and inventorying peatlands. These are foundational steps towards sustainable management of peatlands in Peru.

Another major outcome of the project is a collaboration with the government of Peru focused on moving toward peatland regulation. This process involves cross-sectoral consultation by working hand-in-hand with the Ministry of Environment. Since last year, the SWAMP project has not only provided expertise to support the development of a national definition for peatlands, but it also provided criteria for classifying peatlands and mapping them. This SWAMP-Ministry of Environment collaboration is the result of over six years of research and outreach activities in the country.

“Given the shared competencies between different sectors in relation to peatlands, intersectoral coordination is key to achieving efficient and effective management of the same,” said José Álvarez, general director of biological diversity at Peru’s Ministry of the Environment. Engaging with the SWAMP team has been collaborative from the facilitation of and participation in events, to the exchange of information on peatlands, he said. His work with the SWAMP project has also led to the development of a “Guide to Peatlands” to promote the care of Peruvian peatlands.

“The attention to peatlands poses important challenges, from establishing collaborative alliances between different sectors and actors, to the development of management instruments such as the national map of peatlands, and the quantification of carbon stored in peatlands,” Álvarez said.

These instruments will support Peru in establishing institutional frameworks on wetlands in general and peatlands specifically, to advance the effective management of peatlands.

Information is key in management and conservation decision-making, and SWAMP is spearheading this effort. “There is no doubt that informed decision-making will allow significant progress to be made in the conservation and eventually recovery of peatlands and we have high expectations that SWAMP will continue to support this,” Álvarez added. The management of ecosystems such as peatlands depends on solid evidence that SWAMP and other scientists produce and communicate to policymakers, he said.

For more information, you can read the supporting research article Is Indonesian peatland loss a cautionary tale for Peru? A two-country comparison of the magnitude and causes of tropical peatland degradation.