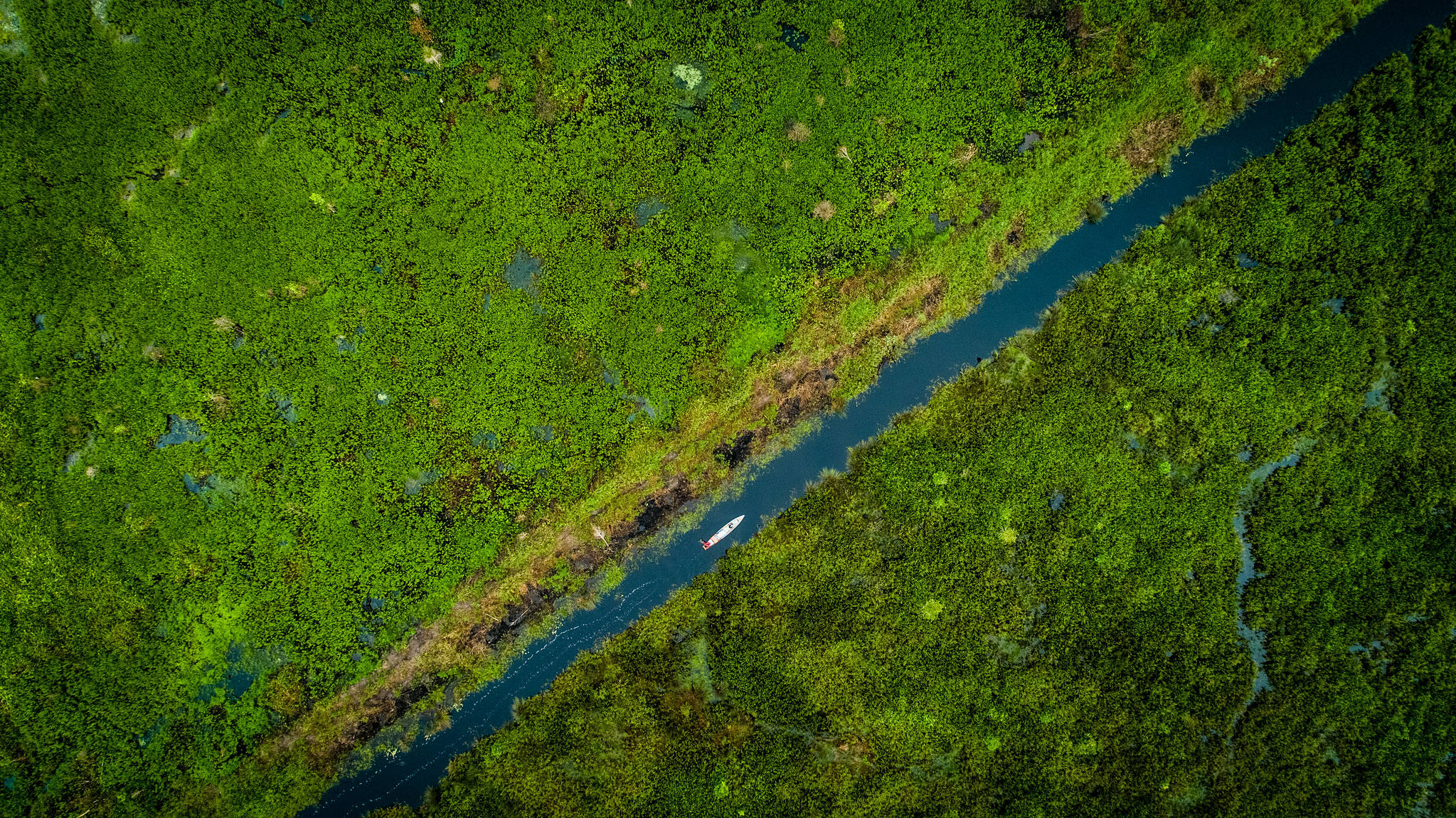 Of 180 peatland-containing countries, Indonesia has the fourth largest area of the boggy ecosystems, after Canada, Russia and the United States. The archipelago also features the largest tropical peatland area in the world.

Worldwide, peatlands make up more than half of all wetlands. They are equivalent to 3 percent of total land and freshwater surfaces. Built up over thousands of years from decaying and waterlogged vegetation, they store a third of the world’s soil carbon and 10 percent of global freshwater resources, according to the International Mire Conservation Group and the International Peat Society.

Although they are vital carbon sinks, Wetlands International reports that 15 percent of peatlands have been drained for agriculture, commercial plantations and for fuel extraction, which leads to oxidization and carbon release into the atmosphere, causing global warming.

At U.N. climate talks in Madrid, Indonesia, which has committed to restore 2.4 million hectares of drained peatlands has presented various strategic approaches to conservation, restoration and sustainable management.

Its centrally located pavilion has attracted a broad range of international speakers from the global peatlands and environmental communities. Even Former U.S. Vice President and 2007 Nobel Peace Prize laureate Al Gore stopped by to deliver a motivational talk in his capacity as founder and chair of The Climate Reality Project.

Working alongside coordinating partners, which include the Center for International Forestry Research (CIFOR), the U.N. Environment Programme and the U.N. Food and Agriculture Organization, through the ITPC, Indonesia is taking a pro-active approach to restoring and protecting its peatlands, said SPM Budisusanti, Director for Peatland Degradation Control in the Ministry of Environment and Forestry.

Successful peatlands restoration is dependent on the application of diverse strategies to address the often competing interests of company concessions, communities and local governments.

For palm oil production, peatlands are drained and the water is diverted into canals. Budisusanti’s directorate is working to assess and create measurements on flood control and water supply.

By monitoring water levels, scientists hope to learn more about the amount needed to keep the level of greenhouse gases they emit as low as possible, said CIFOR principal scientist Daniel Murdiyarso, a world-renowned peatlands expert, who works closely on peatlands and Blue Carbon ecosystems.

“We’re trying to look at how peatlands can be part of the solution,” he said.

Under the U.N. Paris Agreement, the strategy is to prevent post-industrial average temperatures from rising to 1.5 degrees Celsius or higher, the focus of COP 25 talks in Madrid.

Conservation networks should be created to provide green arteries for wildlife and protect natural habitats. Water reservoirs should be surrounded by treed buffer zones that give way to oil palm plantations, then community forests, then village ecosystems, he said.

Through these efforts, the government aims to help protect livelihoods in local communities dependent on fisheries, agriculture, ecotourism as well as plantations.

“One of the visions of the ITPC is bringing governments, researchers, practitioners, civil society and other stakeholders together to ensure conservation and sustainable management of tropical peatlands,” said Aloe Dohong, Indonesia’s vice minister for environment and forestry.

Education, research and technology are contributing to a greater understanding of climate stability and biodiversity.

International peatland conservation efforts are supported by the GPI, a coalition of more than 30 international organizations. The initiative is an effort to save peatlands, the world’s largest organic carbon stock.

“Keeping peat in the ground is crucial if we’re going to meet the Paris Agreement targets,” said Dianna Kopansky, coordinator of GPI in the Freshwater, Land and Climate Branch at UNEP.

“We need to invest in nature-based solutions.”

A major challenge is that current expenditures on peatlands restoration globally are very low, Kopansky said.

“All nature-based solutions combined get less than 3 percent of available climate funding, despite being likely to deliver a third of the emissions reductions needed by 2030,” she said.

Peatlands restoration potential is huge and can often be achieved with low cost, low tech action to deliver high end results, she added.

GETTING BUSINESS ON BOARD

Collaborative progress across sectors is being made, said Faizal Parish, director of the Global Environment Centre.

The Roundtable on Sustainable Palm Oil, which brings together companies that produce 30 to 40 percent of global production palm oil, has introduced new policies against further conversion of peatlands to palm oil, conservation of all remaining peatland landbanks and phasing out of oil palm on peat, Parish said.

“These are very important steps forward,” he added. “Local communities also have an important role to play. They are the original stewards of the landscapes and should be empowered and supported for sustainable management of peatlands.”

“It’s very important to empower local communities and government as well as to build partnerships with the private sector to manage peatlands under the guidance of governments,” Parish said.

“We need to work together at the landscape level to bring together stakeholders and ensure sustainable management of peatlands.”

Another GEF-supported project focused on the integrated management of peatlands in Indonesia (2019-2023) launched in November.

“The overall objective is to contribute to the conservation of peatland ecosystems by strengthening systems for the sustainable planning, management and use of peatlands in Indonesia,” Page said, explaining that the project will target smallholder farm communities in 12 villages in Riau province, and will transfer these experiences to 18 communities Jambi and North Sumatra provinces.