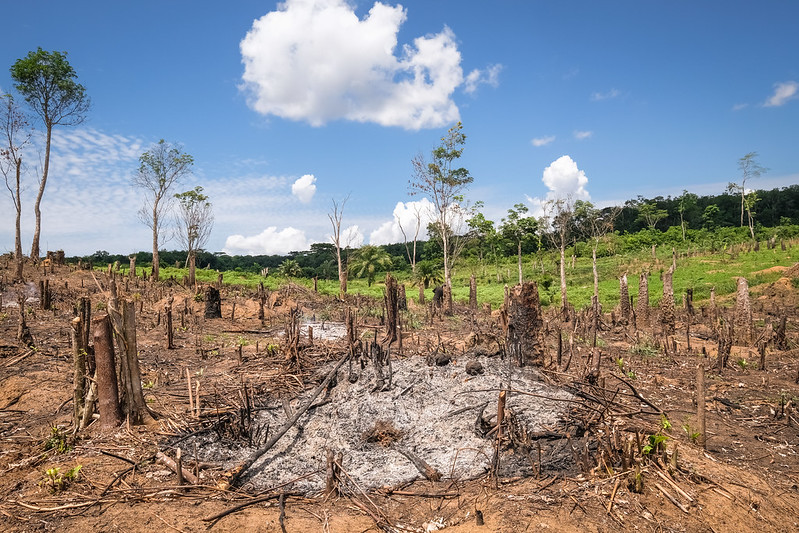 In the last few weeks, news of the wildfires in the Amazon and Indonesia has been difficult to avoid. But if we take a look at Global Forest Watch’s world map showing the past week’s alerts for Congo Basin fires (one-square-kilometer areas in which fire is detected by satellite imaging), we might well wonder if we’ve been missing something important.

Across Central Africa, there’s a huge smear of red that’s much bigger and denser than even its Amazonian counterpart. While Brazil experienced the highest number of fire alerts over this time period, the Central African countries of Mozambique, Angola, Zambia and the Democratic Republic of Congo (DRC) all followed close behind – and each sat well ahead of the numbers in Indonesia.

The highest number of fires in the region sit in and around the Congo Basin, which is often termed the ‘second green lung’ of the planet, after the Amazon. The Basin comprises a mosaic of rivers, forests, savannas and swamps, including the recently-discovered Cuvette Centrale peatlands, which are the biggest stretch of tropical peatlands in the world and estimated to store around 30 gigatons of carbon – equivalent to three years of global fossil fuel emissions.

So why are we hearing so little about these blazes?

NOTHING OUT OF THE ORDINARY

According to Guillaume Lescuyer, a researcher at French agricultural research center CIRAD, the nature of the Central African fires is significantly different from their Amazonian counterparts, and it’s important not to conflate the two. The fires are mostly burning in dry forest and savannahs, and are not spreading through rainforest as they’re doing in South America. “The forested areas are less populated,” explains Lescuyer, “and they resist fire much better,” so out-of-control agricultural burning tends to ‘lick at the edges’ of the dense, moist rainforests without making much of an impact.

The fires are also decidedly unremarkable from a local perspective, says Lauren Williams of the World Resources Institute (WRI), who is based in Kinshasa, because burning to clear deforested land for agriculture is a normal part of agricultural practice. “I have yet to see a report on this in local Congolese media,” she says. “Since this is the dry season and fire is an important management tool used by many to clear land and roads, this is not gaining as much local attention as you might think.” While the number of fire alerts this year is slightly higher than average, it’s “generally consistent with what you would expect to see this time of year,” she says.

Williams also points out the need for caution about how we interpret NASA’s fire alerts: “It is really critical to understand that a fire alert does not equal area of land that is on fire and tells us little about the size or intensity of the fire,” she says. “Satellites tell us where to look, but then additional information is needed to contextualize the causes of the fires and how much of a threat they are to different ecosystems.”

…YET TOO MANY FIRES CAN BE DAMAGING

However, as ordinary as the fires might seem on the ground, their “being usual practice does not mean that we should not be concerned,” says Lescuyer. “We have seen over the last decades that the higher the human density, the more frequent the fires and the more damage on biomass and soil fertility,” he adds. “Too many fires trigger important and sometimes irreversible damage to natural resources.”

So what should be done to prevent too much of the ecosystem going up in smoke? Since fire is such an important part of agriculture in the region, “we can’t talk about reducing fires without also thinking about how to improve yields and practices,” says Williams. That will require vastly improved access to technical know-how, manufactured inputs such as equipment and fertilizers, and funds for small-scale farmers, says Lescuyer.

“We need to support more effective and eco-friendly agricultural practices and better-value natural goods and services, with concrete rewards for those who protect or sustainably manage natural habitats.”