The spongy landscapes comprised of layers of decayed, water-saturated vegetation built up over thousands of years, make up more than half of all wetlands worldwide and are equal to 3 percent of total land and freshwater surfaces. 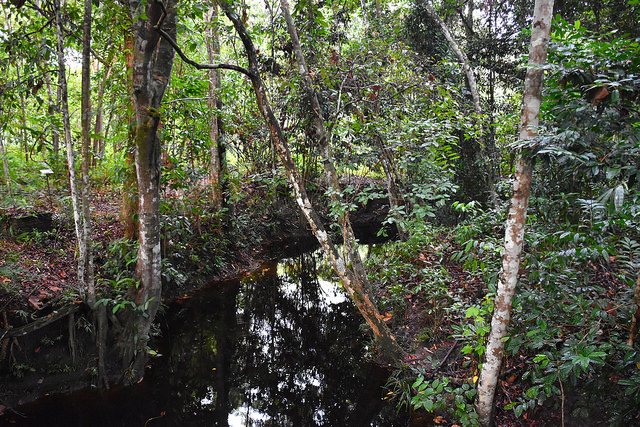 BONN, Germany – Peatland ecosystems have long fallen victim to various human-made environmental pressures, including drainage for agriculture, commercial forestry and fuel.
The spongy landscapes comprised of layers of decayed, water-saturated vegetation built up over thousands of years, make up more than half of all wetlands worldwide and are equal to 3 percent of total land and freshwater surfaces. They store a third of surface soil carbon and 10 percent of global freshwater resources worldwide.

The role of peatlands in landscape restoration initiatives is under renewed focus. Scientists and policymakers are redoubling efforts to restore and protect peatlands amid pressures of climate change.
Peatlands were the subject of discussion at the Global Landscapes Forum in Bonn, Germany, where delegates shared experiences of managing tropical peatlands and the potential for greater south-south cooperation through a new International Tropical Peatland Centre (IPTC) opened in November.

The center, headquartered in Indonesia at the Center for International Forestry Research (CIFOR), includes Republic of Congo and Democratic Republic of Congo (DRC), where the world’s largest peatland in the Cuvette Basin was discovered in 2017. Indonesia produces half of global emissions from peatlands, where are often drained for palm oil and pulp wood plantation production.

“Indonesia is eager to share our invaluable experience with our fellow countries, the two Congos, in managing peatlands with appropriate, sustainable practices,” said Siti Nurbaya Bakar, Indonesia’s minister of environment and forestry. Indonesia intends to share lessons learned, assist and collaborate with other developing countries with the support of UN Environment.

In 2009, Indonesia committed to reduce its national greenhouse gas emissions by at least 26 percent by 2020. In its 2015 Intended Nationally Determined Contribution, the country increased its voluntarily pledge to reduce GHG emissions to 29 percent through its own efforts, and up to 41 percent with international support, against the business as usual scenario by 2030.

Indonesia has made mistakes in the past regarding peatlands, but is now on a path to correct those mistakes, learning from them and sharing lessons learned with other tropical countries on similar development pathways, said Tim Christophersen, head of the water, land and climate branch of UN Environment, which played a key role in establishing the ITPC.
“Siti Nurbaya is a champion for this cause,” he said. If they are managed sustainably, tropical peatlands can offer potential livelihood benefits in addition to environmental advantages.

Draining peatlands causes land subsidence, making them more vulnerable to fires, which can rapidly burn for years underground in the right conditions, a challenge Indonesia has faced, particularly in 2015 when fires burned uncontrollably for lengthy periods due to dry conditions.
That year, peat fires and haze in Indonesia killed 100,000 people, put half a million people in the hospital, and caused up to $40 billion in damage, said Hans Joosten, a top international peatlands expert at Germany’s University of Greifswald.
“We must appreciate very much that Indonesia has taken the lead in turning this back – it’s leading the list of global top emitters from peatlands, even without the enormous peatland fires, but the European Union is a good second,” Joosten said. “The European Union likes to blame Indonesia for peatland emissions, but should also look at their own emissions.”

Developed countries share the responsibility, he said. “If we look at land use, peatlands produce 30 percent of all emissions from all agriculture.”

Land subsidence caused by draining is also a critical problem in peatlands, Joosten said, citing the Netherlands as an example, where much of the country is now at risk of flooding because it is below sea level. In some cases the land has sunk 8 meters.

“We have calculated that peatlands subsidence will, in this century, lead to uncontrolled flooding of 10 to 20 million hectares of productive land worldwide, and that is frightening because we are losing land now that we need it most; for more people, for less poverty, and for replacing fossil resources as we have agreed in the Paris Agreement,” he added, referring to the 2015 U.N. agreement on climate change, which sets targets for reducing global warming in the post-industrial era.

Paludiculture – cultivation of agriculture and plants in wet conditions – is a sustainable management technique for peatland management, producing biomass from wet or rewetted peatlands.
The key message is to keep wet peatlands wet, Joosten said. “Make drained peatlands wet again — and if you use them, use them wet. There will be no Paris without peatlands; peatlands must be wet. For the climate. For the land. For the people. Forever.”

Although paludiculture is an option, it is important to plan strategically to avoid such increased risks as malaria, said Francisco Rilla, director of science and policy for the Ramsar Convention, which provides a framework for wetlands management and conservation.

It’s not enough to simply put water on the ecosystem; we have to maintain variability and the bio-diversity, Rilla said. For conservation, adding water is right, but it is not enough, we need time, and we have to be careful.

In Indonesia, the new interactive Peatland Restoration Information and Monitoring System has been designed to support transparency and complex restoration initiatives to complement the recently introduced moratorium on oil palm plantations, said Budi Wardhana, who heads the initiative at the National Peatland Restoration Agency.

“The purpose of the development of PRIM is to communicate results and outcomes and also to encourage positive momentum, to inspire and allow for transferable resolve, to guide and support implementation of restorations and provide feedback including continuous and collective learning for adaptive management,” Wardhana said.