Water management is one of the most important aspect in the vital effort to protect and restore peatlands. 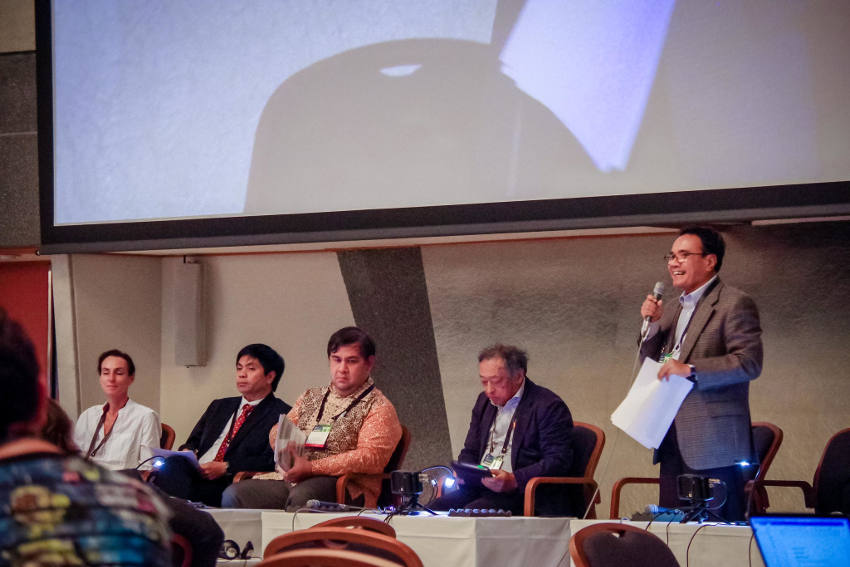 Peatlands hold a highly significant role in combatting climate change. High on the list of actions to mitigate and adapt to climate change by protecting peatlands is reducing greenhouse gases emissions through peat decomposition. Water management is key to these efforts.

“Peatlands play an important role in maintaining biodiversity, reducing greenhouse gas emissions, providing socio-economic livelihoods for ecosystem-dependent communities, protecting inlands from natural disasters, and as a source of carbon storage,” said Agus Justianto, a representative of the government of Indonesia and an ex-officio member of CIFOR’s Board of Trustees. “Despite the importance of peatlands, they are among the most vulnerable ecosystems threatened by anthropogenic activities.”

The International Tropical Peatlands Centre (ITPC) along with Center for International Forestry Research (CIFOR) on May 13, 2019 hosted an event at the Global Landscapes Forum (GLF) in Kyoto, Japan, to discuss the various pressures on tropical peatlands. GLF Kyoto 2019, part of a series of events around the world this year including the annual GLF in Bonn in June, was focused on sustainable landscapes as a critical part of the climate solution.

Justianto explained that the objective of the session was “to share new knowledge and experiences around the implementation of peatland conservation and restoration.” Speakers in the session included representatives from the private sector, research community and government and they discussed the progress and challenges of restoring degraded peatlands; technology for the assessment of peatland GHG emissions; peat hydrology, fire risk and provision of ecosystem services.

Among the five resolutions proposed by Indonesia and supported by other member states and other stakeholders, at the fourth session of the United Nations Environment Assembly of the United Nations Environment Programme, held recently in Nairobi on 11-15 March 2019, was the adoption of an important resolution on peatlands: ‘conservation and sustainable management of peatlands’.

“The resolution urges member states and other stakeholders to give greater emphasis to the conservation, sustainable management and restoration of peatlands worldwide in support of sustainable practice of peatland management,” said Justianto.

CIFOR scientist Kristell Hergoualc’h explained that “in their natural state peatlands are flooded most of the year, so their anaerobic conditions slow down the decomposition. As a result most peat soils are CO2 sinks, but they are also large sources of methane and small sources nitrous oxides.”

“Human intervention for agriculture or forestry modifies the balance of this greenhouse gases and often results in significant increases of CO2 emissions and changes in methane and nitrous oxide fluxes that will depend on the activities and practices that are implemented,” she said.

“In general, total greenhouse gas emissions are likely will be higher as drainage deepens,” said Hergoualc’h. “Raising the water level in crop forest land may decrease the greenhouse gases emissions, but this measure is only going to delay the process of peat decomposition. On the other hand, raising the water level may constitute an effective way to reduce fire risk.”

Sustainable cultivation of peatlands by continually rewetting it is known as paludiculture. FAO peatlands forestry officer Maria Nuutinen said the key word is “wet”. “Paludiculture products need to be wet, this means raising the water table closer to 30 cm, which is the sweet spot where in most cases GHG emissions are optimized,” she said.

She said that the system, that is currently implemented in temperate zones, has triggered considerable innovation in order to overcome the challenges it posed.

She said that apart from producing fruit, berries, nuts and honey, peatland’s potential for sustainable fish production has been “one important area that had been overlooked. … This has been practiced in some areas in Indonesia. The same applies in the Congo where fish has a very high value.”

“Water security is part of food security, and the usage of the very water hungry plantation species on drained peatlands have been very detrimental to many landscapes,” said Nuutinen.

“We have for a long time studied peatlands in Indonesia, and collaborate with many institutions in Indonesia. We are focusing all the parameters in peatland monitoring and we concluded that water is the most important element in peatlands,” said Osaki.

Large peat fires and the haze in Indonesia has been a recurring event for almost two decades. “Fire is the cheapest method for land clearing and also temporarily improves soil fertility and controls pests and weeds. Nonetheless, land clearing by fire as commonly practiced in Indonesia is extremely harmful to the climate, by releasing large amounts of CO2 and methane into the atmosphere,” said Hergoualc’h.

“One single fire burns about 10 cm of peat, that is 100 years of accumulated peat. … Fires are detrimental to the environment, and also present critical public health and economic risks,” she said.

As a native of peat-rich area of Riau, Indonesia, Haris Gunawan, the Deputy of Research and Development of Indonesia’s Peatland Restoration Agency, said that he has experienced first-hand many of the haze disasters over the past 17 years.

Tasked with the restoration of around two million hectares of peatlands in Indonesia, Gunawan believes that “peat hydrological units is important in sustaining peatlands, because 80% of peatlands consist of water.”

Although he said that “in the true sense of restoration it is impossible to restore peatlands to its original state, … it is important to start peat restoration by restoring peat hydrological units.”

The company managed the land in a holistic landscape approach, engaging local community, and have so far made progress. “We have closed about 38% of total length of canal we have in our land, that is over 65km of canals,” Iswarayoga said.

“From 2015 we are relatively free of fire,” he said, adding that although they find it challenging, “restoration is possible with the right model.”