Protection through resilience in carbon-rich ecosystem 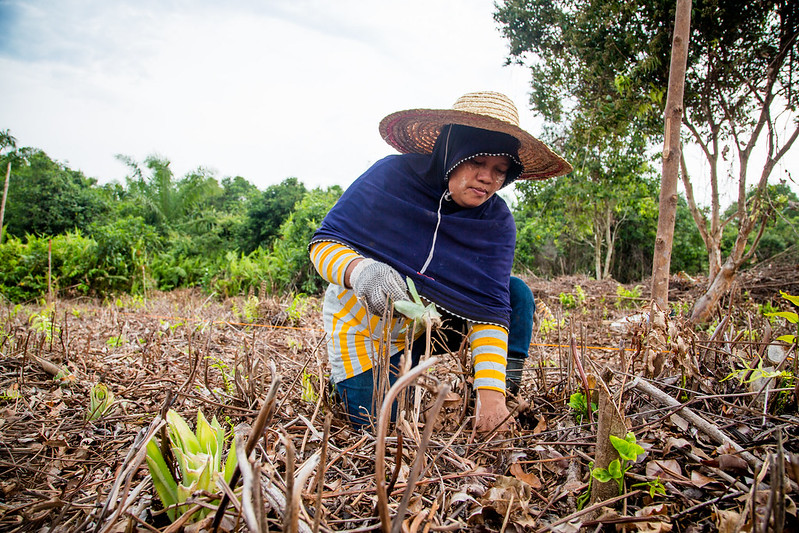 In places as diverse as Central Africa and Indonesia, the impact of conservation and restoration efforts are expected to be far-reaching due to the critical role peatlands play in providing such important ecosystem services as organic carbon storage, provision of water quality and quantity, homes for rare and unique biodiversity, food systems and livelihoods for rural and urban communities.

“The conservation and sustainable management of peatlands must be made a priority for the long-term health and well-being of communities they directly support, but also for the global community who rely on them for the life-sustaining ecosystem services they provide to us all,” said Dianna Kopansky, coordinator of the Global Peatlands Initiative.

To help realize these goals, conservation experts, public policy advisers, and government officials in several countries are working together with urgency to protect and restore peatlands while also providing local communities with economic incentives to keep them healthy and intact.

The global focus on peatlands — layers of decayed vegetation compressed into wet soil over many years — is part of growing awareness of the drawbacks of clearing or draining peatlands for agriculture or development.

In recent decades, many peatlands have been unsustainably developed for palm oil plantations, timber and natural resource extraction, and other damaging uses. With peatlands storing 30 to 40 percent of the world’s organic carbon, degraded peatlands in turn emit tons of greenhouse gasses linked to global warming.

Meanwhile, due to drainage and extended droughts, dried-out peatlands can become a tinderbox for fast-spreading and long-lasting toxic wildfires. In this condition, they can also lead to erosion and land subsidence, generating flooding and salinization of freshwater resources along coastal areas leaving abandoned land unproductive and unusable.

In response to these many challenges, new projects are being designed based on the experiences of projects implemented in the past decade to help point the way forward for people to understand how important it is to sustainably manage peatlands as well as how to do it.

After catastrophic peatland fires in 2015, for example, Indonesia partnered with the Center for International Forestry Research (CIFOR) to launch the Community-Based Fire Prevention and Peatland Restoration Initiative. The program trains small-scale farmers in wet agriculture, known as paludiculture, and emphasizes a “3-R” approach: rewetting, revegetation and community revitalization.

In addition to planting crops that can grow in highly acidic, low nutrient peatland soils, these efforts also stress fish production as a source of protein and income. With the help of scientists from the University of Riau in Sumatra and from CIFOR, the fire-based prevention initiative  enables farmers to collect information in the field and then use the gathered data to assess moisture levels, harvest yields, and overall peatland health. At the same time, the Indonesian government has raised water tables in formerly drained peatland areas and imposed a moratorium on all peatland development.

In 2019, Indonesia issued a permanent ban on new forest clearing for activities such as logging or palm oil plantations. First introduced on a temporary basis in 2011 as part of the efforts to reduce emissions from fires from primary forests and peatlands.

Elsewhere, in the transboundary Congo Basin, collaborative efforts between the Republic of Congo and the Democratic Republic of Congo have centered on keeping the Cuvette Central peatlands — an area larger in size than England and containing the equivalent of three years of the world’s fossil fuel emissions — intact and waterlogged. Rather than draining or clearing the water-soaked landscape, rural farmers instead practice sustainable wet agriculture by planting manioc, bananas, and other crops on a small scale and in waterlogged conditions. Locals also supplement their incomes and diets through fishing and hunting.

At the government level, officials have bolstered these activities as well. In 2018, the Democratic Republic of Congo (DRC), the Republic of Congo and Indonesia signed the Brazzaville Declaration on Peatlands committing these countries to work together to protect and better conserve tropical peatlands, the Cuvette Central peatlands. This was then continued with the launch of the International Tropical Peatlands Center in Jakarta. The DRC, meanwhile, has also created a Peatlands Coordination Unit to develop a national action plan for the conservation and sustainable management of peatlands across the country.

“The most effective approach is giving economic opportunities to local communities and indigenous peoples as way to reduce poverty and translate policy into action on the ground,” explained Jean Jacques Bambuta, DRC’s national coordinator for peatlands.

Taken together, these approaches to sustainably manage peatlands align with broader international goals to limit rising temperatures as part of the Paris climate agreements, bring back degraded landscapes as part of the Land Degradation Neutrality goals of the UNCCD and the newly adopted U.N. Decade on Ecosystem Restoration (2021-2030) and to improve prospects for those living on the socioeconomic margins in a time of worsening hunger and malnutrition.

“With the current pandemic, it is important for countries like Indonesia to secure their own food production in ways that sustain the environment,” Dohong said.

“Building back better” with knowledge of the importance of healthy and wet peatlands through holistic, nature-based approaches is seen as critical to meeting these goals and global targets as economic and social pressures on vulnerable landscapes intensify in the face of COVID-19, climate change, and soaring global populations.

Healthy, wet peatlands sustain rare and threatened biodiversity, filter pollutants, regulate water flows, curb wildfires and provide to a key source of climate mitigation through carbon storage. Continued international commitment and support for to restoring peatlands in ways that provide livelihoods and food for those living in and around peatland regions is also needed, delegates at the GLF conference stressed.

“To preserve and protect peatlands calls for strategic land use, planning and management, and targeted public policies and regulations,” said Roch Germain Mpassi-Moumpassi, director general of sustainable development in the Ministry of Tourism and the Environment in the Republic of Congo.

Added UNEP’s Kopansky, “New models for development are required for peatlands sustainable management and conservation. It is clear that these new models must be context specific and linked to our efforts to build back better with green jobs now and in the future.”

The expression “build back better” was first coined in the U.N. Sendai Framework for Disaster Risk Reduction 2015-2030, adopted by the U.N. General Assembly in 2015. The idea behind the expression is that disaster can trigger efforts to ensure greater resilience than existed beforehand.