Read the original article here https://news.globallandscapesforum.org/49417/perus-peatlands-are-beginning-to-share-their-secrets-and-policymakers-are-listening/. Peru’s peatlands, which harbor the world’s fourth-highest volume of tropical peat, are shrouded in mystery. They are hard to access, tough to map and historically understudied, making it difficult – but not impossible – to regulate and preserve the peatlands. For the past eight years, a team of scientists from both […] 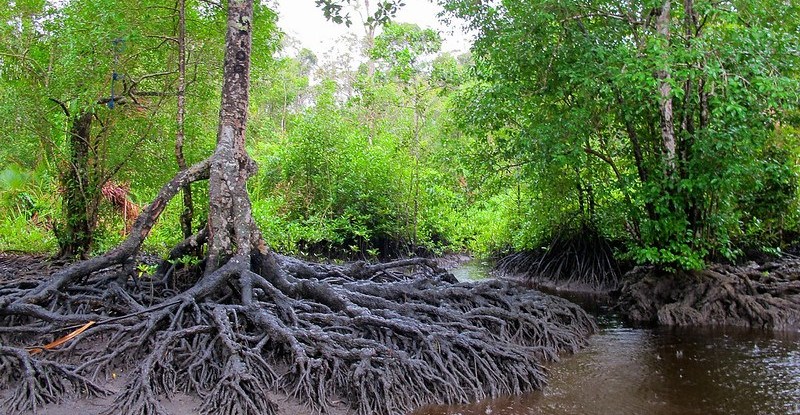 Peru’s peatlands, which harbor the world’s fourth-highest volume of tropical peat, are shrouded in mystery. They are hard to access, tough to map and historically understudied, making it difficult – but not impossible – to regulate and preserve the peatlands.

For the past eight years, a team of scientists from both the Global Comparative Study on REDD+ (GCS), funded by NORAD, and the Sustainable Wetland Adaptation and Mitigation Program (SWAMP), a USAID funded effort by the Center for International Forestry Research (CIFOR) and USDA Forest Service, have worked tirelessly with their partners, notably the Peruvian Amazon Research Institute (IIAP) to uncover some of the peatlands’ secrets. Thanks to their efforts, a growing peatland community of scientists, business practitioners and policymakers has been mobilized to support the government in drafting the first national regulatory framework for protecting these valuable ecosystems.

The regulatory framework would include a specific definition for peatlands in the government’s National Wetland Strategy (NWS) and factor peatland emissions into the country’s targets for REDD+, a UN-led global program for reducing greenhouse gas emissions through preserving and restoring forests. While 2019 figures from the Global Forest Watch show the country’s deforestation rate has not decreased much, the country initially set aims to have zero emissions from deforestation and land-use changes by 2021.

Filling in the gaps

Peatlands are powerful landscapes for mitigating climate change and regulating water cycles. Although they only cover 3 percent of the Earth’s land surface, peatlands store about 30 percent of all terrestrial carbon. The waterlogged conditions in these swamps slow the decomposition of the organic matter, which creates a thick layer of peat made of partially decomposed leaves, twigs and other plant material.

Scientists who traverse these Amazonian peatlands in Peru might find themselves wading shoulders-deep in the decaying debris, which also functions as a massive carbon reservoir: two meters of peat store 10 times more carbon than the same depth of mineral soil.

However, much about South America’s peatlands remains unknown. In 2012 when Hergoualc’h’s team began studying Peruvian palm swamp peatlands – known locally as “aguajales” because of the abundance of aguaje fruit palm trees – there was a dearth of scientific knowledge about peatlands outside of Southeast Asia.

Then and now, missing data, lack of understanding, lack of political coordination and inadequate funding make it difficult to protect the Peruvian peatlands through environmental legislation. This puts them in a vulnerable position as they are increasingly threatened by oil and mining activities, road construction, overgrazing and climate change, to name a few.
Read more : Comparing the 3 peatland regions most crucial for climate change

In order to protect peatlands, the GCS-SWAMP team and their partners, including IIAP, realized they needed a long-term plan that would generate research and translate it to positive impacts in peatland awareness, stakeholder collaboration and national policy.

The team’s research findings were and continue to be the building blocks for higher-level outcomes and impacts.

“More efforts are needed to improve existing maps, identify drivers of peatland degradation, enhance assessments on carbon stocks and measure GHG fluxes so that these ecosystems are properly included in national policies and global treaties such as the Paris Agreement,” says Hergoualc’h.

So far, the scientists’ research has made significant progress; they have found noteworthy losses of biomass carbon stocks and shifts in species composition associated with the degradation of aguajales. They have also found that degradation modifies soil-atmospheric exchanges of greenhouse gases like nitrous oxide and methane on a microscale. However, more research on peat GHG fluxes —in particular carbon dioxide and their controls including rainfall patterns — is needed to understand how degraded palm swamps in Peru could affect climate change.

Peru’s Amazonian palm swamps are often degraded as a result of unsustainable aguaje fruit harvesting from the Mauritiaflexuosa palm tree, whose fronds create much of the landscapes’ canopy cover. Endemic to the Amazon, aguaje is little-known outside of Latin America but prized within for its bright-orange flesh rich with antioxidants and vitamins.

The fruit provides jobs for more than 5,000 families in the Peruvian Amazon. But instead of climbing the palms to collect the fruit, foragers often cut the palms down, which reduces tree cover, modifies nutrient inputs and allows more sunlight to reach the ground and disturb the microclimate and balance of GHG emissions.

Working together with local as well as government stakeholders is essential to ensure peatlands are properly regulated and managed in the long-run.

In March 2019, a national symposium on managing Peruvian peatlands convened scientists, policymakers and business practitioners in Lima to launch a “Peruvian peatland community.” This symposium culminated years of research, conferences, workshops and other outreach activities aimed at protecting Peruvian peatlands. “This event along with past efforts…has propelled a process for the government to formally recognize its peatlands and work on a regulation framework,” says Hergoualc’h.

Since the symposium, Peru’s Ministry of Environment (MINAM), with which the GCS-SWAMP team works closely, has come closer to developing a national definition for peatlands and formally including peatlands in the country’s wetland classification system. “Accepting the existence of peatlands in Peru will be the first step for developing new regulations to ensure the protection and sustainable management of peatland ecosystems,” says Euridice Honorio, a scientist with IIAP.

Today, high hopes surround the future of the peatland community and its evidence-based outputs. “There is no doubt that informed decision-making will allow significant progress to be made in the conservation and eventually recovery of peatlands,” said José Álvarez Alonso, General Directorate of Biological Diversity at Peru’s Ministry of the Environment, in an article from Climatelinks, “and we have high expectations that SWAMP will continue to support this.”

Hergoualc’h agrees: “There’s an impressive willingness by all actors to collaborate and make progress toward the conservation and sustainable management of peatlands in Peru, from communities living in peatlands to government,” she says. “It’s exciting to contribute to these efforts.”