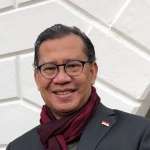 Dr. Efransjah was born in Lima Puluh, Asahan, Sumatera Utara in 1956.  He has more than 30 years of experience working with government, international organizations, including the United Nations, and civil society. A vivid writer and storyteller with strong competency in public speaking, he has previously served as moderator, panelist and chair in various international meetings.   After graduating from the Faculty of Forestry in Bogor Agricultural University (IPB) in 1980, he pursued higher learning in France under government sponsorships and obtained a Master and Doctoral degree in Sciences du Bois from Universite de Nancy 1 in 1988.

Dr. Efransjah was appointed as the CEO of WWF Indonesia for two terms from 2010 -2016. Prior to this, he served as Regional Coordinator for Southeast and Middle Asia for CIFOR, an international forestry research organization. For more than six years he was in Kuala Lumpur, serving as the Chief Technical Advisor for UNDP’s GEF large initiative for conservation of peat swamp forests in Pahang, Sarawak and Sabah. He was also based in Yokohama, Japan for 10 years working as the Projects Manager for Asia and Pacific in ITTO (International Tropical Timber Organization) from 1993 – 2002.  He started his career with the Ministry of Forestry in Jakarta in 1980.  Upon his retirement, he is currently appointed as a Senior Adviser to the Minister of Environment and Forestry.