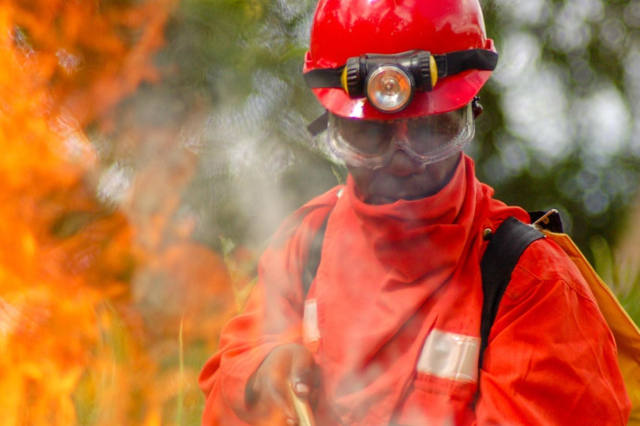 In the past week, images of fires flattening forests and smoke shrouding cities have dominated news feeds and pulled on public consciousness like never before. With blazes claiming land not only in Brazil but also across Asia and the Arctic, Africa and Europe, it seems as if no part of the world is spared from going up in flames.

From a climate-change mitigation and conservation perspective, the wildfires this year in Indonesia and the Amazon Basin in particular, which together contain some of the world’s most critical carbon sinks and biodiversity hotspots, seem particularly alarming. But some commentators are arguing that the fires are a seasonal occurrence and not of particular concern.

What does the science say?

It is certainly true that these fires are not without precedents. Farmers have used fire to clear land for agriculture in both regions for centuries if not millennia. “The Amazon Basin burns every year,” says Manuel Guariguata, a principal scientist at the Center for International Forestry Research (CIFOR). “Every dry season – that’s when people burn the debris from recently-felled forest to prepare their fields for agriculture.”

Around the world, land managers at all scales – smallholders, medium-sized farmers and large companies – also use burning as a land-clearing method, as it can increase soil fertility, reduce salinity, prevent diseases, and increase the value of a property on the local land market because of its readiness for planting.

A main reason for burning’s popularity, though, is that it’s much more cost-effective than other means of preparing land to be planted. According to CIFOR scientist Herry Purnomo, in the Indonesian context, using fire costs only around USD 20 per hectare, while other methods cost around USD 400 per hectare. Especially in contexts where land tenure is uncertain, “investment in preparing land is risky,” says Purnomo, so quick and cheap land management makes financial sense. “In short,” he says, “there is a strong economic reason to use fire.”

The method is not necessarily problematic in itself, says Guariguata. “As long as you burn under controlled conditions, respect fire management rules and regulations, and keep your fire in check, that’s fine.” But when fires are not managed carefully and conditions are too dry, the fires often escape, and can spread as ground fires in the surrounding forest. This raises surface temperatures to levels that can weaken large trees, which are often unadapted to such heat and flames. “Naturally-caused forest fires are very rare in the Amazon,” he says.

Time will tell if this year’s fires will be record-breaking in either region. As of 24 August, Brazilian Space Agency (INPE)’s data showed 41,858 hotspots recorded in the Brazilian part of the Amazon Basin in 2019. U.S. space agency NASA has reported this year to be the most active fire year for the region since 2010; before then, hotspot numbers regularly topped 60,000 by this date, reaching a record of 94,780 in August 2005.

In Indonesia, according to government figures, the area burned up until the end of this July (138,000 hectares) is considerably lower than last year’s total (around 511,000 hectares) and much less than the 2015 total (2.6 million hectares). While some fires are still occurring in Sumatra, Kalimantan and other parts of Indonesia, “I still believe the number of fires this year won’t exceed last year’s figure,” says Purnomo.

How alarming are the numbers?

To put these numbers in context, the 2005 Amazon fires might have been comparatively worse, says Guariguata, but that was during a very dry season. This year, “it’s particularly concerning because it’s not a drought year,” says Louis Verchot, a director at the International Center for Tropical Agriculture (CIAT). “INPE has indicated that rainfall is only slightly below average.”

That has spotlighted a concerning trajectory for deforestation in the region. From the late 2000s until last year, Brazil’s deforestation rates were the lowest they’d been for decades, thanks to supportive policies and improved monitoring and enforcement.

When Jair Bolsonaro became president of Brazil in January of this year, he dismantled the national environment ministry, weakening environmental regulations and giving a “carte blanche to agribusiness”, says Guariguata, which has since had deleterious consequences for forests in the name of expanding cash-crop plantations and cattle ranches.

By the end of July, deforestation rates were tracking 57 percent ahead of last year’s. Since then, the picture has been unclear because INPE stopped releasing its data to the public after Bolsonaro fired INPE’s head.

However, an underplayed portion of the current narrative around Brazil’s fires is that steps in the wrong direction had already been taken prior to Bolsonaro entering office. Former president Michel Temer made substantial budget cuts starting in 2017, reducing federal science funds as well as those of the federal environmental preservation agency IBAMA, cutting their budgets by 44 and 43 percent respectively.

“The places where you have the highest extent of forest fires now are those states that had the most stakeholders aiming for agribusiness expansion,” says Guariguata. “So it’s very probable that what’s going on in Brazil today relates to recent deforestation.”

In Indonesia, the national government has taken considerable steps toward mitigation since the 2015 fires, such as restoring and protecting peat forests, which are vulnerable to wildfires and release enormous amounts of carbon if they ignite; expanding a deforestation moratorium; creating a government agency specifically dedicated to peatlands; providing economic incentives not to use fire; supporting community firefighting and monitoring capabilities; enhancing law enforcement; developing hydrological infrastructure; and boosting early response capacity.

However, says Purnomo, there’s not always follow-through on these efforts at the local level. In a research paper awaiting publication in International Forestry Review, Purnomo and colleagues found that fires tend to increase a year before local elections. “Close to a local election year, law enforcement against burning land is weaker,” he says. “Deforestation, land grabbing and burning happen much more before and during election years.”

This year’s fires have also shown that some of the infrastructure for mitigation and prevention is not working properly, because it is insufficient or improperly maintained. Moreover, while the government has deployed the army and police to help suppress fires in affected areas (and arresting those they find responsible for lighting them illegally), “the capacity of all those actors, in terms of human resources, knowledge and budget, is still not enough to prevent, identify and suppress fires entirely,” says Purnomo.

What could help mitigate uncontrolled burning in the future?

“What I would like to see is a commitment to good governance in the Amazon region,” says Verchot. “Previous successes in reducing deforestation rates provide ample evidence that if resources are allocated appropriately, deforestation and burning can be reduced.”

“I understand that there are trade-offs when state resources need to be allocated,” he adds. “However, illegal activities represent lost revenues to the state, so there should be a way to find a better balance than what we are seeing today.”

In the Indonesian case, Purnomo says that the recent presidential instruction for a permanent moratorium on permits for oil palm, pulpwood or logging activities in virgin forests and peatlands “is a big step toward reducing fires in the future.”

He would like to see the strategies outlined in the country’s Grand Design for Fire Prevention 2017-2019, which he helped develop, fully implemented and evaluated. “Right now, it’s partially implemented; I’d like to see enough money flowing to reduce fires to half of business-as-usual. The cost should be borne not only by the government, but also by the private sector, communities and donor agencies.”

While foreign aid can and should play a role as well, contributions toward the Brazilian fires, particularly from the world’s most economically powerful countries at the recent G7 summit, were “too little, too late,” says CIFOR’s director general Robert Nasi, regardless of whether or not Bolsonaro accepts the aid.

“More powerful prevention and active fire management must be how we go forward,” says Nasi.

Nasi has repeatedly stated that the media needs to pay more attention to the fires happening beyond Brazil, in order to level the playing field of awareness with other regions and ecosystems.

But it’s a balancing act, as the importance of the Amazon also cannot be minimized. “Everybody says that it’s the ‘lungs of the world,’ but it’s more than that,” says Guariguata. “The role of the Amazon Basin in pumping water and sending that water to distant locations has been scientifically proven.

“It also has forest-dependent people who thrive on it, and it’s really a biodiverse treasure. So it has a social value. It has a biodiversity value. It has a hydrological value, which is also important for agriculture. What happens in the Amazon can be felt thousands of kilometers away.”